Vladislav Neganov has thanked the board and supporters of Lokomotiv 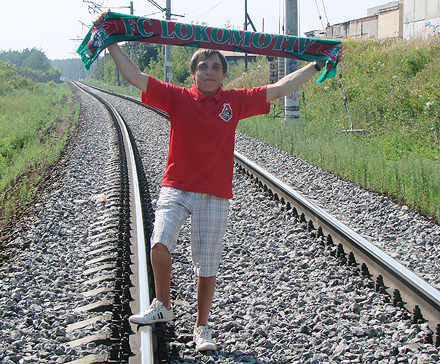 Lokomotiv supporter Vladislav Neganov, who needs an expensive backbone surgery, has sent the letter to football club Lokomotiv where he thanks the president of the club Olga Smorodskaya, all the employers and supporters of Lokomotiv for helping in collection of money for medical treatment and surgery.

- I want to say to Olga Yurievna, all the employers and supporters of the club huge, human thanks for rendering me so necessary help. Thank you that you haven`t remained the indifferent to my disaster.By-turn I promise to love football club Lokomotiv so much as now and support it with the same passion on the stadium. Whatever happens with the club it will always be in my heart!“LOKOMOTIV – is a one big and friendly family”.When you published my request about help on the official web site, my mobile phone was being burst from calls of red-green brothers and sisters.I was phoned from different regions of our Russia, I was supported by words, I was written SMS and e-mails, and some people sent money on mentioned account. With your assistance and assistance of all those who supported me and those who continues to support me, I`ve stopped to lose heart. I`ve found a strong spirit and have started to believe that necessary amount will be collected and doctors will make a surgery.

Football club Lokomotiv calls to all supporters not to remain aside from problem of Vladislav and render him a feasible help.