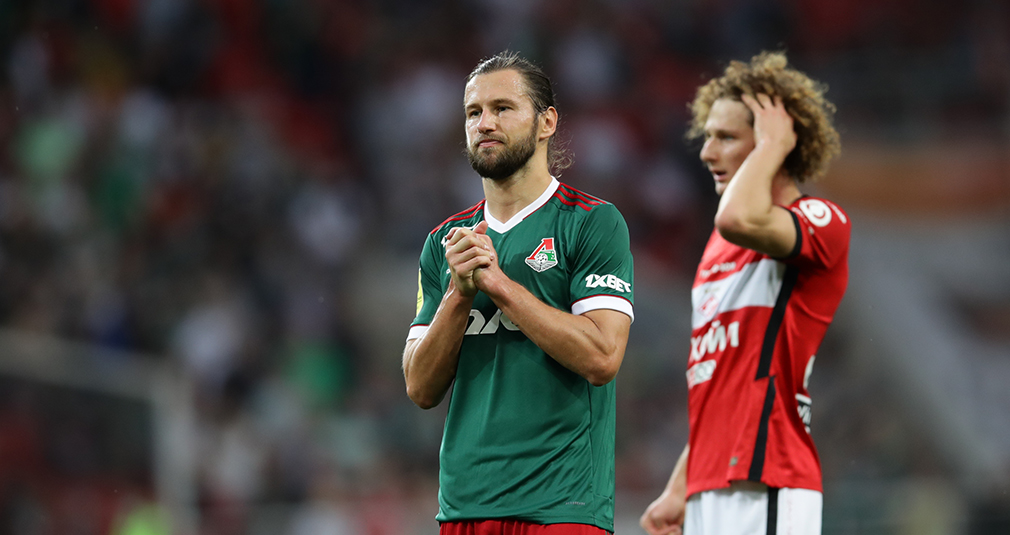 Lokomotiv started the game against Spartak with the usual line up, but with an unusual formation - two forwards, with Smolov and Eder up front and Miranchuk brothers on the wings. Vladislav Ignatjev also returned to the starting 11, and Francois Kamano was included in the squad.

Spartak’s main signing Alexander Kokorin did not recover from the injury in time for today’s derby game, but Domenico Tedesco was leading his team from the bench after he recovered from a flu.

Lokomotiv started well and scored an a early goal in the tenth minute. Lesha Miranchuk made a great cross from a free kick and Murilo hammered the ball into the net with his head.

The remaining half an hour before the break turned into a real nightmare for Lokomotiv.
On the 18th minute, Dmitri Barinov got injured out of the blue. Dima was taken off from the field on a stretcher. Magkeev came on as a substitute.

On the 36th minute, Lesha also got injured out of the blue. Miranchuk injured the back of the thigh, he tried to return to the game, but after a couple of minutes it became clear that he could not continue. By the middle of the first half, Lokomotiv lost two key players.

Spartak created their only dangerous moment between the injuries of Barinov and Miranchuk. Larsson got the ball near the edge of the box, but his shot went above the bar. The rest of the half, the red and white controlled the ball, but practically did not create anything near the goal.

But in the second half there were plenty of chances. Already in the 53rd minute, Larsson burst into the free zone on the left wing, received a long ball from Dzhikiya and finished a one-on-one chance. Spartak controlled the ball, but Lokomotiv still created excellent chances.

Anton Miranchuk went one on one with the keeper, but Zobnin was able to recover and get the ball off our midfielder before he had a shot on goal. Twenty minutes later, Eder also had one on one chance but his shot went over the bar.

Nine minutes before the final whistle, Spartak's pressure resulted in their win. After the cross into the box, Kral headed the ball to the far post, where Sobolev was waiting. His header went past Guilherme.

For the last minutes, the coaching staff completely changed the offensive line, releasing Lisakovich, Zhemaletdinov and Kamano all at once, but this did not bring any dividends. This loss has interrupted Lokomotiv’s 14-match unbeaten run.