Anton And Smolov In, Rybus and Krychowiak Out. Lokomotiv Draw Against Krasnodar 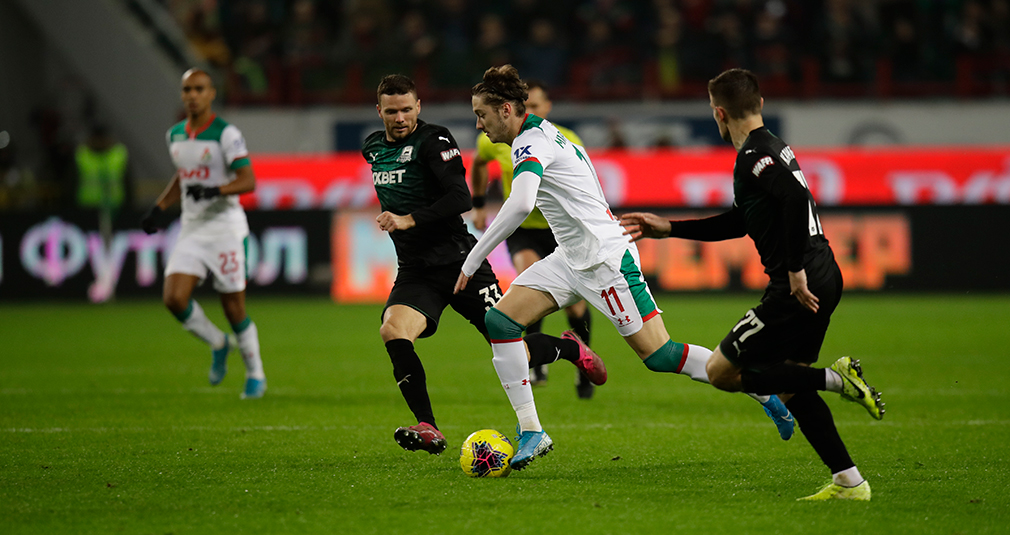 Lokomotiv and Krasnodar find no winner in a 1-1 tie in Gameweek 16 of the Russian Premier League.

Prior to the game, Lokomotiv again were able to boast Smolov and Anton Miranchuk in the registry. However, new losses were also there. The Railroaders had lost Barinov, while Rybus got injured in the pre-match warm-up.

Krasnodar also had its own issues – the Bulls still lack Cabella, Klasson, Gazinskiy and Wanderson. On the other hand, Ari and Fernandes were back. And it was the Brazilian-Portuguese duo of Loko’s ex-s that set up for the first goal. Manuel crossed to the far post and Ari headed it home, but the referee canceled the goal due to offside.

Soon Fernandes directed his cross at Berg but the Swede sent the ball off the target. Krasnodar’s third opportunity came in the 33rd minute through Kambolov’s curved ball that was narrowly saved by Guilherme.

Lokomotiv capitalized on their very first opportunity. Joao Mario ignited a counter-attack where Miranchuk was knocked down right outside of the area. Aleksey’s free kick shook the crossbar but Krychowiak sent the deflection home with a first touch.

Four minutes later Lokomotiv lost a player again. Ari played rudely against Krychowiak, heading him in the back of the head, and was booked. It took Grzegorz some time to get back on his feet but he was unable to go on after the break and was substituted for Anton Miranchuk.

Krasnodar scored a late goal in their first half’s last offensive. Ari crossed to Berg who broke away from Zhivoglyadov and touched it into the net from several metres.

The second half brought much less action. Lokomotiv had to review their tactics twice – first when Joao Mario moved down to defensive midfield, and second when he moved back up after Kulikov replaced Zhemaletdinov.

Both teams were committing many fouls and earned five bookings in 45 minutes. The ball swayed from one side to the other but was kept at bay from the goal. The only real danger came in the 69th minute when Ari sent the ball above the crossbar trying to finish a cross by Fernandes.

Lokomotiv and Krasnodar have sealed their second draw this season. The Railroaders are off for a short international break in the second place, five points behind Zenit. The Bulls are sharing their third place with Rostov and CSKA.